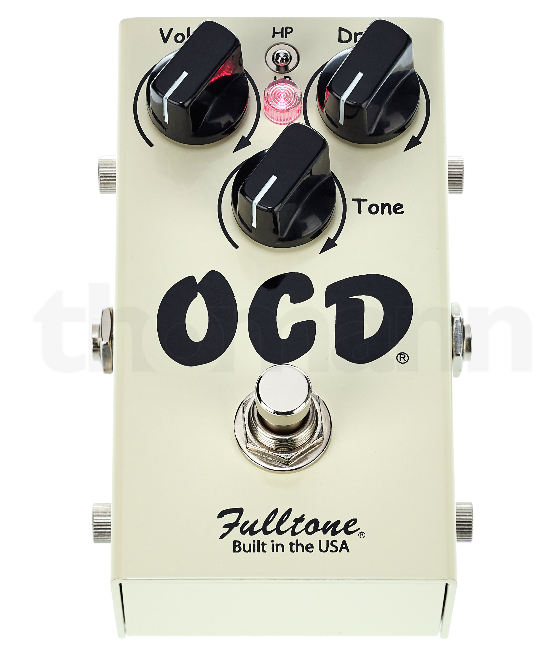 Nowadays, various electronic devices are used to enhance the sound of music. Some of the important articles of a guitar setup are guitar pedals featuring effects that take your playing to another level. They produce effects that are divided into distortion, modulation, echoes (this includes reverb and halo, which create a hall sound, and delay, which repeats a distorted sound), wah-wah, tuners, equalizers, etc. Distortion effects are created by the shape distortion of a sine wave signal and it is created by semiconductors, tubes or combined (also hybrid). OCD Fulltone V2 achieves distortion by the unusual combination of switching its JFET (type of transistor) operational amplifier and then clipping it by a pair of MOSFETs (type of transistors) later in the circuit. This circuit works very well with a large number of guitars and amps. Distortion could be divided by character into overdrive, crunch, distortion and fuzz. OCD Fulltone V2 makes overdrive sound what means something like „overexcited“. The effect simulates the sound of an overdriven tube amplifier (transistors make it better than diods). In English is called „soft clipping“ what means that the originator of the distortion is placed within the feedback width of the amplification stage. Clapping is only applied to the signal increases producing a much softer transition between unclipped and clipped sections of the waveform. OCD Fulltone V2 produce bright and crunchy sound appropriate for blues, rock and hard rock.

The Fulltone Obsessive Compulsive Drive (OCD) is created by Mike Fuller. Varies overall level (volume knob), amount of distortion (drive knob) or proportion of treble and bass tones (tone knob). When you turn the tone knob to the left, you get darker tone, to the left the brighter.

It also features an HP/LP switch, which allows you to vary the response from a more `British` vibe with increased mid-range and break-up, to a signal that is ideal for use as an amplifier into an already overloaded signal. HP is an abbreviation for „high peak“ and it makes the sound hotter, brighter and so more suitable for rock and metal. LP means „low peak“ and increases warm tones and purity of sound.

The V2 incarnation adds an all-new Class „A“ buffer that provides full tonal and dynamic range and fully harmonic content with high amount of available output volume, similar to preamps, to improve the overall signal and sensitivity of the guitar. JFET input raising the impedance from all previous OCD version’s 330K to 1 Mega ohm.

The OCD V2 features a switchable buffer that allows you to choose a „True-Bypass“ operation or the new „Enhanced BypassTM“ function. Technically, this is a strict system of switching the signal in the box directly from the input to the output jack via the switch contact, without any further connection of the signal path to anything! So like that it isolates the input from everything coming before the OCD in your signal chain whatever amp and guitar you’re playing through. It allows much more sustain and overtones than previously OCD’s, even at lower distortion settings. It is also giving more touch-sensitivity to the pedal. It offers totally “pop free” switching, so you don’t get any loud and possibly destructive noises when switching the pedal ON or OFF. Fulltone uses its own 3PDT foot-switch containing the best parts available anywhere. It`s also extremely responsive to player dynamics and guitar volume settings with quick controls. To sum it, OCD Fulltone v2 contain everything a guitarist could want. As expected, a company with a long tradition has put on the market a very high quality product.